Semantics of the Spiral, Unwound

We’ve been talking around the idea of Spiral Thinking for several weeks now, but have yet to advance the metaphor beyond a general sense that it’s an improved way to think about learning. It’s a captivating visual. But in terms of manners and symmetry, it’s clearly less well-behaved than it’s straight-as-an-arrow distant cousin, Linear Thinking. 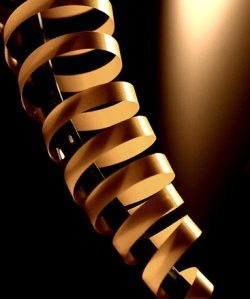 Spiral as a metaphor for thinking

Our only saving grace so far, perhaps, has been the DNA double-helix. Or the haphazard flight of a bumble bee.

To see if we might further use the Spiral metaphor in useful ways, let’s take it apart, as we think about what it might represent for us as a visual aid, in the context of thinking and learning.

We know we rarely experience the world or learn from it in a linear fashion. Our lives are a round-about journey.

We won’t stay in the Spiral metaphor too much longer. We’re clearly testing the limits of how spatial and visual a Twitter Chat can be. But it helps to know the limits of our visual tools. If we’re going to use Spiral Thinking as a metaphor, we need know how and when to apply it, but also, as Lakoff advises (to paraphrase) we need to know when enough is enough.

Thinker. Author. Explorer of edges. Passionate about learning and coffee. Founder of #smchat and #orgdna communities. Writing on Medium. END_OF_DOCUMENT_TOKEN_TO_BE_REPLACED
This entry was posted on Sunday, March 31st, 2013 at 11:59 pm and tagged with learning, metaphor, model, spiral, spiral thinking and posted in learning, metaphor, semantics, spiral thinking. You can follow any responses to this entry through the RSS 2.0 feed.
« As the Spiral Turns: From Culture to Community
The Courage to Collaborate [FRI 4/26 CBODN 2013 Conference, Arlington VA] »

One response to “Semantics of the Spiral, Unwound”